*Warning* There may be an expletive used in the writing of this blog entry as the blog writer is totally pissed off!

This morning as I checked my Twitter account before heading out the door for my run an article link flashed before me and I could not resist opening it up…mostly because the first word that entered my brain when I read the title was “Bullshit”.

I refuse to mention any of the statistics in that article because I consider it to be garbage. Why? I am living proof that this study is wrong.

In a day and age where interest in fitness, eating clean and overall health is at an all-time high one would hope that positive messaging, images and conversation would be present in what we read and what we share in an effort to encourage and inspire.

The scenario that I can see unfolding from this article is a discouraging and all too often played out one. “Beth” has decided to get in shape. She is feeling motivated and driven to get out that door and start her carefully planned out exercise program and she has already added in some fundamental changes to her food and water intake over the last few weeks. She checks her Twitter and this article grabs her attention.

After reading it and being consumed by the negative, disheartening statistics and blunt message that no matter what she does she will fail because she is part of the majority not the minority, she takes off her running shoes and goes back to bed. “Beth” has just been ‘fit-blocked’ by a researcher in a different country who has no vested interest in her or her future.

This makes me mad.

Who are these people to tell us that there is hope for only the very few after telling us that us our lives depend on making these changes?

A few years ago I happened to watch a documentary about aging. The message it held was that part of the reason humans age is because we watch people around us age. When an individual goes out in the community and commits random acts of kindness often others will follow suit because they have watched the exchange that took place. So it stands to reason that if people watch someone change their life, their body, their health in a positive way and that person shares through photos or other mediums then the message is sent that they can do it too,  that it is possible and it sparks a fire within them.

This changes the story of “Beth”. Instead of reading an article full of disempowering, non-motivational, statistical crap she reads my story or the story of so many other people out there that have done this and she starts to believe in herself. She feels strong, able and ready to face whatever effort is required to meet her goals head on.

I will never lie and say the battle is easy but we as a society can make it more probable that one will succeed in their efforts if we build them up on the way out that door instead of tearing them down.

Wherever you are, whatever you are doing I hope you are taking my message of motivation and inspiration with you through the day because it is real, it has been done, I have walked in those shoes and I believe in you. YOU GOT THIS! 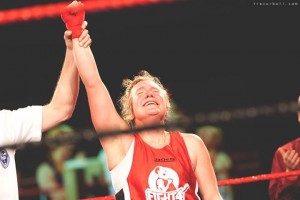