There are no words in any language anywhere to describe the pride I had in my son today. The closest I can come to it is to tell you my heart burst, tears flowed and the smile could not have been bigger on my face.

Last Christmas season my son and I participated in the 5 KM Salvation Army Santa Shuffle in Victoria. He found he had a difficult time running and he even expressed concern over the fact that he felt out of shape. We both celebrated crossing the finish line together but I knew it weighed heavily on him. One of the positive outcomes of that moment was the decision to become mostly gluten-free. It has helped his energy and his general feeling of health.

Over the last year I made a personal commitment to myself that I would include Brody in as many of the physical challenges that I was undertaking as possible. I know he watches me. I know he is acutely aware of how I’m challenging myself and how I’m living my life. I wanted to show him that anything is attainable if you put your mind to it.

In the last 12 months I have seen him running outside more, riding his bike more, making more informed and healthy food choices. It has been a challenge for him at times I know but he has seen that I am walking the same path as him.

Today, Brody and I took part in the 2014 Santa Shuffle alongside some pretty amazing people. We started out the run together and as I have pointed out before I am eager but I am far from fast. It quickly became apparent to me that he was itching to run faster, that he wanted to run ahead. I told him “Go!” and as I watched him speed up I saw the feeling of utter joy on his face. He was in his element. He was feeling the pavement under his feet, feeling the breeze on his face and feeling the crisp winter air fill his lungs. All I could think was “Run…run with your heart.”

After a bit I couldn’t see him and figured we would meet at the finish line. I came to where there was a 1/2 KM to go and there was my son – waiting to cross that finish line with me. He had run the entire race. He had his own awakening. Shortly after we had started this morning, Brody made the comment that I was slower than last year, so during that last 1/2 KM I told him that it wasn’t that I was slower because I was running the same speed I always had – it was that he was running faster because he believed he could.

Kids watch us, plain and simple. They learn from us how to treat each other, how to treat themselves and how to let the world defeat them or how to rise above it and shine.

On the way to the race this morning my son told me about something called Co-op dollars that the kids in our co-op have created. They earn “money” based on other kids catching them doing random acts of kindness for other adults or kids in our community. That blew me away. Now tell me they aren’t paying attention.

Turn around and look. Really look at who is watching you in your life. Who are you inspiring, who are you motivating and who are you setting an example for? 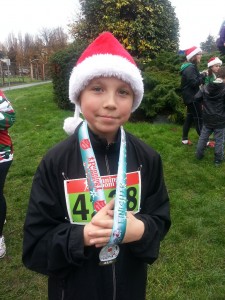