So many of us feel that we have to strive for perfection over the holidays. We are bombarded with constant media messages that in order to have the “perfect” home or gathering we have to buy a particular object or service.

Perfect doesn’t lie in decorations, in presents under the tree or in the presentation of your home. Perfection is held in the moment that someone holds the door for a person struggling with packages. It is contained in a child’s smile when they see someone they love watching them at a school performance. It is present in the hugs you give your friends and family.

I had a very humbling lesson in perfection Saturday. For Christmas my son wanted desperately to go downtown and give out bananas and water to people on the streets. His rationale behind the bananas was that they were healthy and there was less of a chance of an allergic reaction. The water was because everyone deserves a refreshing drink.

I was so touched by his request and wanted to make sure he got the chance to do this so I contacted Save-on-Foods at Tillicum Mall to see if they could help with any expense as I wanted to get as much as possible. They stepped up to the plate without hesitation and when Brody and I went into the store they gave us a $35 gift card. So card in hand we raided their bananas, grabbed 4 flats of water and 2 cartons of mandarin oranges. I threw in some mini candy canes as well as a little Christmas treat can go a long way.

Before heading downtown we went through our closets and were able to find several scarves, hats and jackets that we never use anymore and would gladly pass on. Food and clothing in hand we headed for Our Place.

When we got there we were met with such appreciation by the staff. They provided us with a table and a space in their drop in center so that we could lay everything out. Brody and I had been so excited prior to this but really had no idea what to expect. I can safely say that this experience moved me in a way I don’t think I’ll ever truly be able to communicate.

Perfection yesterday afternoon presented itself in several different moments. It was observed in the young lady who came by the table 3 times just to say thank you. It was held in the smile of every person who came up and the holding out of a hand to shake. It was in the woman who was so terribly excited that she was getting new glasses the next day.

I saw it in the moment I witnessed a woman at a table giving another woman one of the red scarves that I brought in after getting it for herself and hearing the other woman excitedly exclaim that she used to have one just like it but lost it in a backpack that had been taken and that it was beautiful.

It was witnessed in the moment Brody and I were driving away and we saw a young girl from the drop-in walking down the street bottled water and bananas in hand. To know that people in this city were going to be a little warmer, a little less thirsty and a little less hungry because of something that took 20 minutes of our lives to do made both of us feel awesome!

Last, but certainly not least, perfection was when I saw my son behind this table eagerly ripping open packages of water and passing things out and smiling this warm, genuine smile at each person who came up. He didn’t see race, religion, status or any of those things that so often divide people from each other. He saw people and he wanted to help.

Wherever you are, whatever you’re doing I hope that you and the ones you love are able to find your own perfection this holiday season. Take those moments and hold them dear because they are what truly matter in this life. 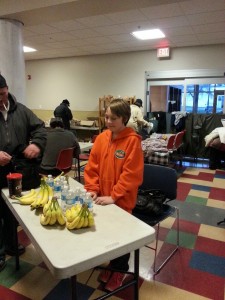 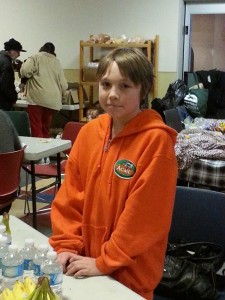